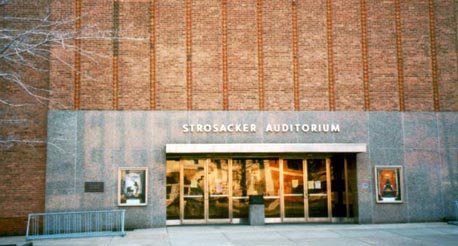 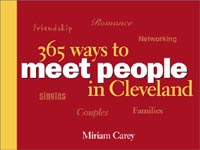 Miriam Carey's book, 365 Ways to Meet People in Cleveland mentions our Science Fiction Marathon as a place to meet people.

Film Society in the Ancient Days

One of our traditions is an end of year party at the Pink Pig at the University-owned Squire Valleevue Farm in Hunting Valley, Ohio.

The biggest special event held every year is the Science Fiction Marathon in January.

We like to do a little live entertainment now and then so here's what we did before the showing of Harry Potter and the Sorcerer's Stone.

For the Lord of the Rings: The Two Towers showing, we had some staff members show up in costume. 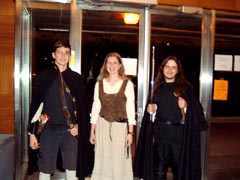 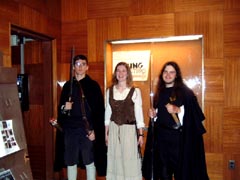 On April 23, 2005 for our showing of Dirty Dancing, we had some dancing demonstrations. Check out the pictures and movies.

There are also many other special events held during the semester such as free sneak previews. Some of the free sneak previews we've shown in the past: Bram Stoker's Dracula, American Beauty, U-571, Jerry Maguire, and K-PAX. Free popcorn, drinks and prizes are often given away before showings during our regular season.

Since Fall 1998, we've been showing The Rocky Horror Picture Show for Halloween complete with a live cast[broken link, once again salvaged by archive.org]. Here's some pictures from the 2001 show.

The Film Society has had a tradition of showing an adult movie at the end of the semester. These pornographic movies were a way for the students on campus to have a little fun and relaxation before finals week. Until this past semester, Spring 1999, the last porn movie shown on campus was seven years ago. Contrary to popular belief that the movies stopped showing because of moral or political correctness issues, it was actually a supply issue. The pornographic film industry simply switched from producing films to producing videos. As a result, it became difficult to find movies on film.

Adult movie night is a tradition at the end of the semester. For the first time in seven years (spring 1999), the tradition has returned. We had a great turnout. Here's some pictures of our staff hard at work and having fun too!